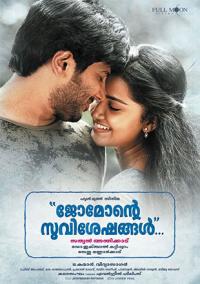 Dulquer Salmaan plays the role of Jomon, the irresponsible son of the self-made businessman and widower Vincent. The story, set in Thrissur, revolves around Vincent's family, focusing on the relationship between the father and the son. Vincent, who is very fond of his son, constantly tries to instill in him a sense of responsibility, only to be met with failure. Jomon falls in love with Catherine, who he meets in the church while attending the Sunday mass on his father's insistence. Vincent also puts Jomon in charge of men's wear store so that his son can develop a sense of maturity. However, much to Vincent's dismay, Jomon sells the men's wear store to the store manager at a meager price. It is later revealed that Jomon sold the store, along with his expensive motorcycle, to invest in and become the managing partner of a textile store in Thiruppur along with his friend Mushtaq. Meanwhile, a financial catastrophe befalls Vincent. Vincent loses all his property and is evicted from his house. Vincent, abandoned by all other family members, joins Jomon in Thiruppur where they begin to live a modest life. Jomon is forced to terminate his relationship with Catherine due to the family's newfound financial constraints. Jomon's life in Thiruppur is equally turbulent as the new business venture fails as a result of Mushtaq's extravagant lifestyle. He starts working as a salesman for a textile company, during the course of which he befriends Vaidehi-- an accountant at a textile manufacturing company he happens to visit on business. Vincent, who also has difficulties adjusting to the new lifestyle, takes up the job of a tailor to fund his expensive habit of smoking imported cigarettes. After the series of setbacks in their business, Jomon and Mushtaq, along with Vaidehi, manage to successfully build a new business venture. Soon, Jomon is able to buy back Vincent's old house and the family reunites with new lessons learned. Meanwhile, Jomon falls in love with Vaidehi, who moves into Thrissur along with her father.

This is an Indian Malayalam family drama film directed by Sathyan Anthikkad and written by Iqbal Kuttippuram. The film stars Dulquer Salmaan and Mukesh in the lead roles.